The Chungba Schools
An organic model of community-based mother-tongue bilingual education that continues to challenge stereotypes about the potential of rural Tibetan children of
​farmers and pastoralists
The Chungba Schools form the heart of the Chungba Project, which has been the foundation of Machik’s mission and work. Challenging stereotypes of Tibetan rural students, both of the Chungba Primary School and Chungba Middle School have been top performers in Ganzi Tibetan Autonomous Prefecture, a region of about a million Tibetans, since their first year of existence in 2002 and 2008, respectively. The Chungba Primary School (CPS) was initially funded by Pencho and Tsering Rabgey who donated Pencho’s retirement savings to seed the construction. Then Chris Walter of Yayla Tribal Rugs became an angel investor. Dr. Tashi Rabgey and Dr. Losang Rabgey co-founded Machik to grow this foundational work for community empowerment. Dr. Peter and Kathy Anderson later became the angel investors for the Chungba Middle School (CMS). From the start, the parents and other community members have supported Tibetan language based schools for their children.

The success of the model of the Chungba Schools rests in these factors:  (1) mother-tongue based bilingual education with Tibetan language instruction, (2) community based approach integrating parents and teachers through the county’s first Parent Teacher Association (PTA), (3) valuing of the vital role of teachers and other essential support staff, (4) greenhouse providing organic vegetables, (5) regular access to clean water, (6) gender parity and (7) support of a Tibetan performing arts program. Machik founded and long supported the Chungba Primary & Middle Schools and then also supported the students through high school in other counties and universities in other cities in Tibet and China.
Chungba Primary School 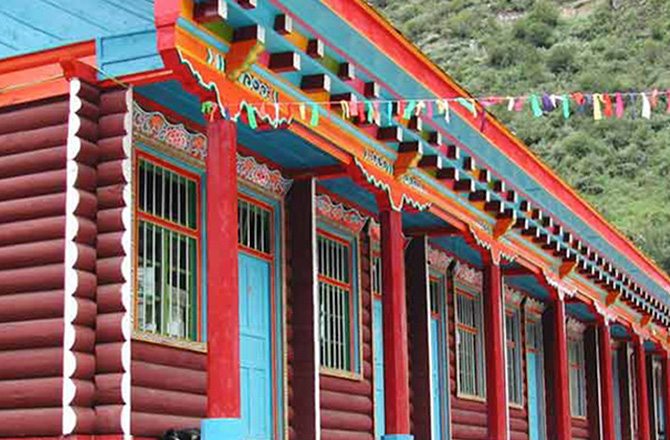 Part of the dormitories of the original Chungba Primary School construction.
In the late 1990s, the villagers of Chungba reached out to retired factory worker Phuntsok “Pencho” Rabgey, a former Chungba community member who was now living in Canada. Located deep in the heartland of Kham, Chungba was a typical rural Tibetan community. With no electricity, running water, telephone lines, internal roads and virtually no literacy, this mountain community was unequipped to manage the rapid changes arriving at its door. The community recognized that they needed a school that could provide their kids the education they would need as Tibet continued to face uncertain times. When Pencho and his wife Tsering decided to answer that call and to cash in their only retirement savings to seed the project, the effort to build a brighter future for Chungba began with little more than hope on a shoestring budget. It was a long process and effort to gain agreement from local authorities to create Litang County’s first ever Tibetan language based bilingual school. This was the priority of the children’s parents who wish for their language and culture to thrive. Opened in 2002 with the support of social entrepreneur Chris Walter and the Litang County Bureau of Education in Sichuan, the Ruth Walter Chungba Primary School - named after Chris Walter’s late mother who championed education - became a runaway success story in its first year of operation.

In the years since then, the Chungba Primary School has become a model for rural Tibetan education across Ganzi prefecture- a region of nearly a million Tibetans.

Since the very beginning, 50% or more of the students have been girls. Almost all the parents have had no formal education and were encouraged to be partners in their children’s education by joining the have been respected partners in the schools’ success. Machik also built a clean water system, an organic greenhouse for the school, and a trilingual library for the students and teachers. Essential for the school’s early success was Pencho and Tsering’s idea to start a Tibetan performing arts program that taught the children traditional music and dance from the local area and from other areas of Tibet. Machik also funded and designed programs to continue teacher training and to offer housing for teachers who play a vital role in every school.

In the very first year of the CPS, the students placed first out of 53 schools in Litang County in standardized Tibetan language testing. Education authorities had never seen a rural remote school outscore students in the county town so the Chungba students were retested and they did even better the second time around. By the time the first class of Chungba students graduated grade 6, they placed first in the county in both Tibetan and Chinese language standardized testing, competing with Chinese students in the county seat. In six years, the students became fully bilingual in a Mother-tongue based bilingual school. Many of the first Chungba students who later graduated university have returned home to Chungba as teachers at the original CPS and a number of others are now teachers and school principals in other counties and areas of Tibet.
Chungba Middle School

When the first entering class of the Chungba Primary School graduated from grade six in June 2008, we faced a pressing need for a new middle school. There then was only one middle school in Litang County and it was unable to absorb the graduating class of Chungba students. To compensate for the lack of local infrastructure, we worked hard to build a new middle school to serve Chungba and as well as two other adjacent rural communities. Ground was broken on the construction of the Chungba Middle School (CMS) complex in 2006 with generous seed money from Dr. Peter and Kathy Anderson of Lindsay, ON, Canada. After sustained fundraising over several years, with great help from KC and Hong Choong, Barbara Kelley and the Machik Lindsay Dinner crew from Machik Canada, Machik opened the doors of the new Chungba Middle School (CMS) in August 2008. The CMS is the first middle school in any rural township of Chungba and is also Litang County’s only mother-tongue based bilingual middle school. Just in time, the first-ever graduating class of the Chungba Primary School were able to continue their education by attending the CMS.

The combined CPS and CMS combined campus currently serves over 850 students and staff.  In 2011, the first class of rural Tibetan students graduated from the CMS.
Learn the story of how the Chungba Schools were created
Chungba High School Campaign 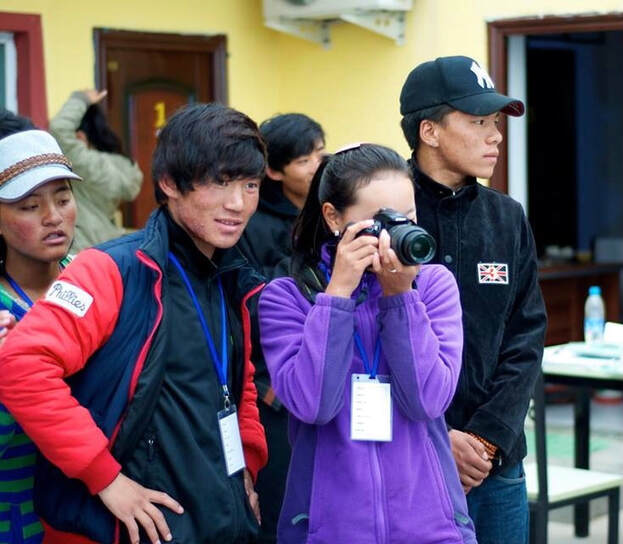 In Litang County today, with a population of about 50,000 Tibetans, there is still no high school. The Tibetan students graduating from the Chungba Middle School (CMS) do not have the option to continue their secondary education near home. Machik firmly believes education is a fundamental means to empowerment, and especially so for girls and women. A high school education is vital for access to university and post-secondary vocational training. Machik created the Chungba High School campaign (CHS) to support Chungba students to pursue secondary education in other Tibetan counties and areas. Machik initially supported many CMS graduates to study in Batang, Ganzi, Ngawa, Dartsedo and Rebgong. In 2014, the first group of CHS students, most of whom are from the original class of Chungba students, graduated from various high schools. Among them, Chime Lhamo of Chungba became the first student from Litang County ever to place first in the standardized college entrance exam (gao kao) in all of Ganzi prefecture, a region with about a million Tibetans.  She also became the first student to place first in both Ganzi as well as Ngawa (Ch. Aba) prefectures. Chime Lhamo accepted at entry into the first ever bilingual law school program at Central University for Nationalities in Beijing. She was raised by a single mother who has long been a farmer in Chungba.

Since July of 2018, Machik has not been able to continue supporting the CHS program. And yet, each year, CMS graduates, along with their parents and other family and friends, continue to find ways to support their secondary education. The culture  of Tibetan language based education has been established and embraced by the community.
Machik Khelen Fund 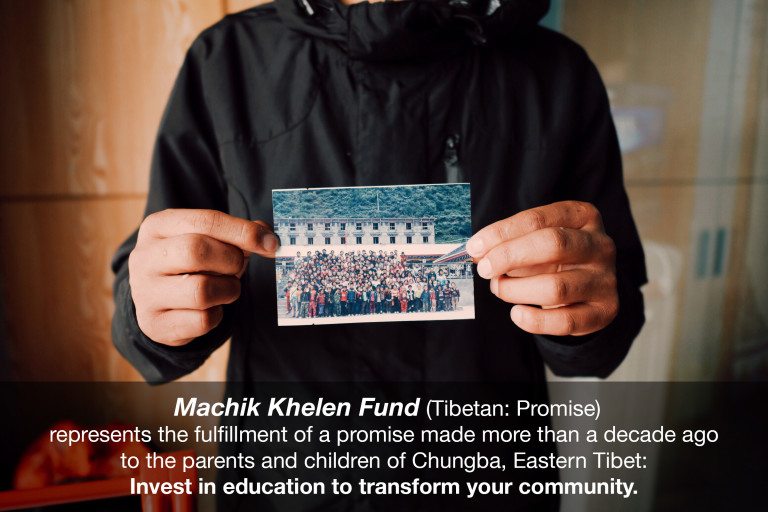 In 2014, 38 members of the original Chungba Primary School class enrolled in university.  The entry of the Chungba students into post-secondary education marked the fulfillment of a promise Machik made in 2002 to the parents of the Chungba students. We endeavored to do our utmost to create a new path for the community’s young people to become their future community leaders. The first college entrants graduated in June 2018 and have become teachers, lawyers, healthcare providers, artists, and so on. Some have returned to the Chungba Schools to become award-winning teachers instructing new generations of local children. Others have become award-winning teachers in other Tibetan counties, reaching many more students. Gelek has become a surgeon, Tsering Nyima studies filmmaking, Samdrup is a graphic designer, and Chime Lhamo graduated from law school and entered a Master of Law program in Beijing.

The success of the Chungba Schools model rests on its community-centered education. Building the school has been about more than just a construction project. We employed new resources and creative programming to build infrastructure, invest parents, motivate teachers, provide adequate and enriching resources, and more importantly, to build the trust between parents, teachers and students. And we delivered on mother-tongue based bilingual education. This approach has ensured that the school would be sustainable and community-owned. From kindergarten to college, Machik has worked closely with rural Tibetan parents, teachers and students and a growing community of global supporters to create a sustainable model of education that builds a stronger future for local communities and Tibet. 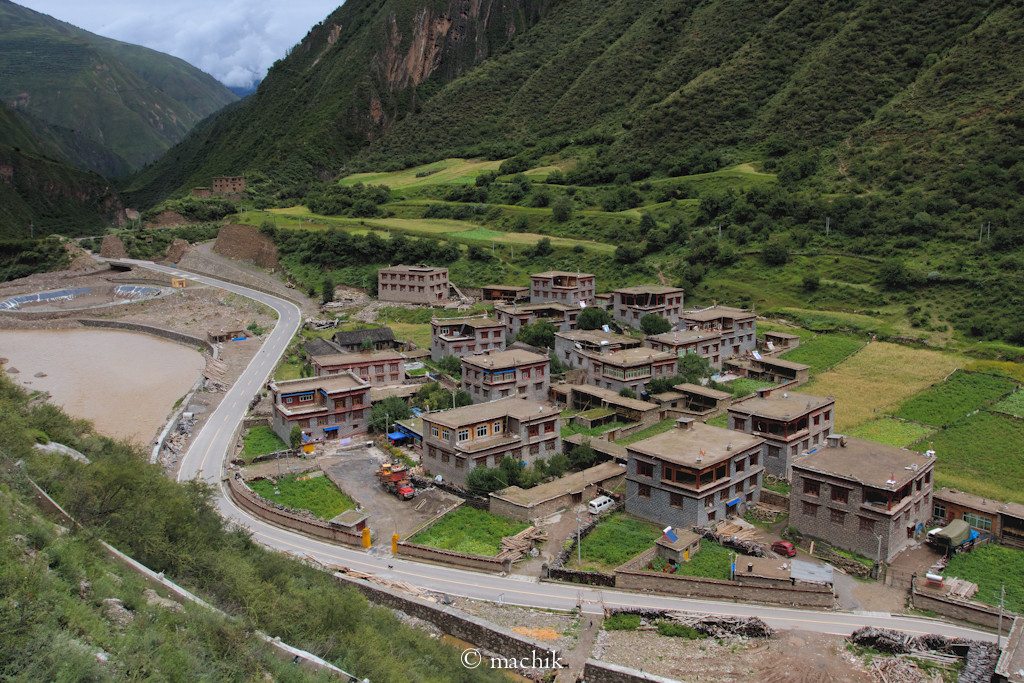