A Year in Chungba: Amala’s Story
From June 2007 to June 2008, Tsering Rabgey lived at the Chungba Primary School in the Kham region of Tibet. 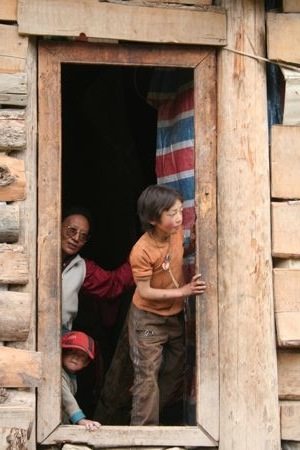 Dropping everything to spend a year in a foreign county is not a commonplace occurrence; spending that year in rural Tibet is even less so. But this is exactly what Tsering Rabgey, Machik Advisory Board member and mother of co-founders Losang and Tashi Rabgey, decided to do from June 2007 to June 2008. Tsering, or Amala as most call her, lived in the rural township of Chungba to experience Chungba Primary School life and witnessing how the school and the rest of Machik’s community projects were functioning during a full-year cycle.

Amala’s decision to stay in Chungba for a full year came as a response to a number of issues. Since the founding of the Chungba Primary School and the launch of other Machik initiatives in the surrounding region, members of the Machik team have been making fieldtrips to the areas with ongoing projects. From these trips, it seemed that the projects, and particularly the school, were having great success – in fact, the Chungba Primary School was ranked higher than over 800 schools in the region.

But to really get a sense of how the projects operated on a day-to-day basis, the Machik team knew that someone would need to stay for a longer period of time. Factors such as the changing of seasons and temperatures, for example, could not be felt effectively in even a month- or two month-long visit. And, as Amala noted, it was “possible that while we thought [the students] were doing well and always doing their homework on time, maybe this was only because we were there visiting.”

Staying for a year, Amala thought, would give her the chance to build even deeper relationships with the children, the teachers, parents and the local community. It would be an opportunity to explore the children’s perceptions of their schooling and to hear firsthand the parents’ thoughts and concerns about their children’s education. This would also be a chance to visit other schools in the area and see how the Chungba School compared.
Incredible Work Ethic

In June 2006, Amala left her home in Lindsay, Ontario, for the long journey to the remote township of Chungba. Any fears of the Chungba School’s selective productivity were quickly dispelled. As Amala explains, the children have incredible work ethic – they “never forget their textbooks [and are] always holding them everywhere they go.” The teachers also spent much of their time helping the students, who continued to study and work tirelessly for the duration of her stay. She found that the students were thrilled to be attending the school and to have the opportunity to obtain an education. They seemed, she notes, to understand how important their studies are for their futures. Amala was especially inspired by the fact that the students needed no urging to complete their homework, but rather did so of their own free will. It was obvious, then, that the progress these children had presented in past visits was just as pronounced during the rest of the school year.

The longer stay also gave Amala the chance to experience the typical routine and conditions the students face during their school year in Chungba. Her daily routine began around 5:00 am, when she would wake and get ready for the day. The kids wake soon after, around 6:00 am, to exercise and then wash up. Afterward, they work on their homework, make their beds, and get ready for classes. Breakfast is at 7:00 and classes begin at 8:30. In the evenings, the children watch the news on a TV channel from Beijing, eat dinner, and continue studying. Unlike many other local schools, the children also have classes on Saturdays.

On a typical day Amala would sit in on the Chungba classes to observe both the students and the teachers. She wanted to make certain that everything was running smoothly, that the students were behaving and that the teachers were arriving promptly. “Of course,” she says, “if they came in late and saw me there, the next day they would be sure to be exactly on time.” She also tried to eat her meals with the children as much as possible to ensure that the children’s food was nutritious. The vegetables at the Chungba School are organic – grown in the school’s own greenhouses. Though many doubted the success of locally grown produce given the difficult climate, Amala makes clear that this skepticism is unfounded: “No matter the season – summer, spring, fall, winter – the whole year round it grows.”

In addition to helping with the greenhouse, Amala worked closely with the children on planting evergreens and other native plants around the school. She explained to the students how to plant and how to maintain the garden, using photos of her own garden in Canada to show different types of plants and examples of the results the children could expect. The kids, staff, and teachers, she says, were all happy to work on the gardens and to have the opportunity to plant a variety of flowers and trees around the school.

Another important aspect of Amala’s time in Chungba was the opportunity to experience the year round weather conditions of the region. According to Amala, the summer has near-perfect temperatures, with clear skies and no humidity. The winter weather, she says, is always misunderstood. People think, “it must be terrible” or “how can they survive there?” What she found, though, was not nearly as bad as what many people expect. While it is chilly indoors during the nights and early mornings, Amala says that the daytime winter weather is perfect once you’re outside. “In fact,” she says, “now that I’ve worked there for a whole winter, I know that you don’t have to worry about it being too cold or terrible at all.” She says the only inconvenience was not having heat in the evenings and mornings, but that is according to Western definitions of climate control.

​During her trip, Amala was also able to travel to other schools in the area and to meet with various government officials, both of which she said were important and helpful experiences. She visited a number of schools in areas inside and out of Chungba’s Litang County and found that the Chungba Primary School really did appear to have the best of all aspects of education: classrooms, teachers, dorms, and food – all of which she attributes to the many people in the Machik community and how hard they’ve worked to support education. While Amala is aware that the Chungba School lacks some of the resources we have in North American schools, she makes clear that, in comparison to other schools in the area, they actually lack very little. Principals from other area schools, she says, are sometimes forced to accept old computers and even old blankets because they lack the money to buy new things. Luckily, she says, Machik is “taking care of our school in Chungba and we don’t have to do that.” And after seeing so many schools with so much less, Amala made sure to remind the Chungba students  that their important needs are met and how this good fortune should push them to work and study as hard as they can.
Lessons Learned

While all of her experiences were positive, Amala claims that her fondest memories are of her time spent with the young children. “That’s my special memory,” she says, “that is always in my mind. The young ones were always calling, ‘Amala! Amala!.’ I miss the kids, especially the young ones.” And clearly the feelings were mutual: at the end of her stay the students were so upset that she was leaving that they threatened to stay in her bedroom until she agreed to return!

​Overall, Amala said she had a great experience with the students, teachers, and the community. She was able to learn more about the school and what it means to the village and to the surrounding county. She is happy for “getting the chance to visit so many places and different schools,” she says. She feels strongly that others should have this type of opportunity and wishes more diaspora Tibetans, younger and older alike, would go to rural areas inside Tibet and see firsthand how much needs to be done. Amala is especially proud of her daughters, she says, for doing just this. They were given more opportunities and a better education and yet they still choose to advocate for the largely underprivileged people on the Tibetan Plateau. Amala’s hope, then, is that other Tibetans will visit these areas and be drawn, just as her daughters were, to a life of service for those who need it most.
Machik, 1203 K Street NW, Washington DC, USA, 20005   |   202.536.4858   |   info@machik.org   |   www.machik.org